Why do my nested layers shift when I move/transform to the left or right?

I rigged a character and had the eyes and mouth/beak nested in the head. Then I put all elements on a peg. But when I moved the peg/character to the left the eyes and beak shifted out of sync with the head. Please see the attached screenshots below.

I know I’m doing something wrong but I cannot seem to figure it out. Is there a setting that can lock the nested elements to the parent figure without shifting/skewing?

Any help will be greatly appreciated!
Thank you in advance. 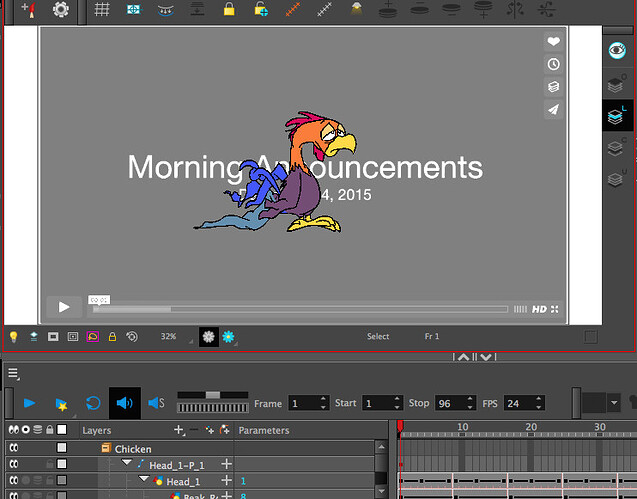 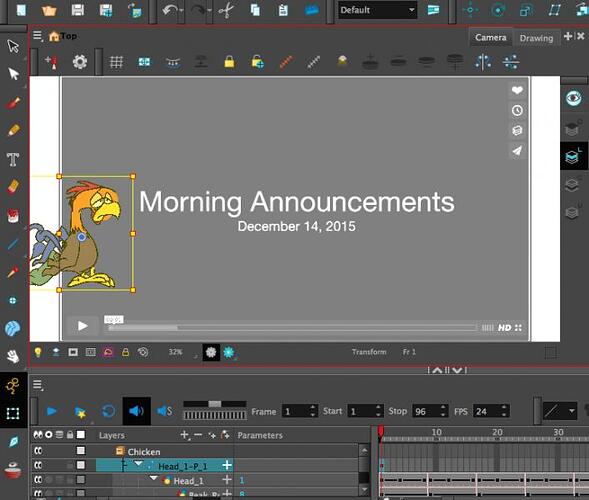 Hi, I am no specialist in Toon Boom, been lurking around the forum to learn it too. I wild guess is if the eyes/mouth are front in space (z axis) so it gives you that effect.

Hi, I am no specialist in Toon Boom, been lurking around the forum to learn it too. I wild guess is if the eyes/mouth are front in space (z axis) so it gives you that effect.

Most likely, yes. Try looking into your modules via the Top View. Should they wander far from the 0 Z value (origin) push them back using the Maintain Aspect Ratio tool.

Thanks auramancer!
I’ll try that. You’re right that as I manage all my layers that I might be putting them too much closer toward the camera. I’ll try the maintain aspect ratio and see if that works.

Thanks again for the tip! I guess I’m thinking too much like this is Photoshop!

Remember that the closer the animated layers are to the camera, the bigger the
effect due to differences in the Z-values between the layers. Instead of moving
things closer to the camera to enlarge them, you can instead scale-up the master
peg controlling the scene (or conversely, scale-down the camera’s peg)

Thanks for the suggestions!

My problem is not a scaling issue but kind of a skewing issue. I wish I could post some images of my solution which seemed to work. I’m not a master of nodes but I’ll look at it again in the summer to see if I can figure it out.

When I moved layer elements around in Top, I had them too far away from each other when I should have kept them very tight to each other so that the skewing would not occur. This seemed to be the solution as the “higher” animated elements like eyes and mouths no longer are “drifting” away from the parent/head layer.

Thanks for all your help folks and steering me to the light!