Why am I missing options in my brush tool menu?

Im watching the video tutorial for toon boom animate and the woman in the video is explaining how to change the settings for her brush but I don’t have those options and my brush is extremely limited.

Im using toon boom animate pro 2 so shouldn’t it be the same? 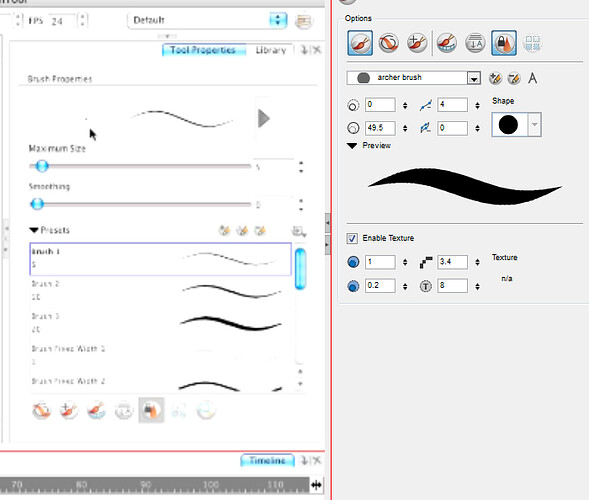 *edit ok now I see what you are talking about. For what ever reason the first half of the video series is filmed in animate pro 2 and then the screen cap is filmed in 3 thats why I didn’t see the difference.

Ok so we both have the same version or at least animate pro 2 but im missing all of the advanced brush tools or the brush properties panel. You can see on the left she has all kinds of extra sliders when pushing some button that doesn’t exist in mine. My brush tool is all limited. I don’t even have an option to have an end taper hardness or texture scale

If you tell me the exact name of the video I can see whether or not you are mistakenly believing you should have features that are only available to version 3.

Please post the video title exactly how it appears.

Which video are you referring to?

The brush features inherited some enhancements from Harmony in version 3.

All of videos in the animate video tutorial her brush settings have all kind of sliders and chanages that mine doesn’t. I took a screen cap above you can see on the left is from the video and on the right is mine and mine has a lot less features.

There are videos online ranging from version 1 to version 3 of Animate and Animate Pro.

After wrapping up his successful ‘Watchmen’ series with the Air Jordan IV “Rorschach”, Sekure D is back showcasing his love for Neon Genesis Evangelion with the nike air force 1 high white Nike Air Force 1 “Evangelion” customs. While sneaker customization is reaching new heights, the use of glow in the dark has catapulted as well, and Sekure D made sure to use Nike’s recent Air Force 1 “Glow in the Dark” as the canvas on his most recent release. Paying homage to parts of the nike air force Eva 1 with the purple paint job, the Typse S on the heel tab and shoulder logo on the heel tie everything together. View more photos of this custom below.
Branding is paramount to success – just ask the founders of Apple, Inc., McDonald’s, automobile manufacturers, and clothing labels that have risen to worldwide air force ones nike prominence and retail dominance in the history of consumerism. The importance of visual iconism was a concept grasped thoroughly by Phil Knight, who created Blue Ribbon Sports in 1964; once BRS became more profitiable, Knight commissioned Carolyn Davidson, a student at Portland St. University, to create a new logo that would represent the new nike air force 1 high brand, and although Knight claimed that he initially didn’t love the design, he stated he would eventually let it ‘grow on him’. Knight paid Davidson $35 for her work and the first Nike shoe bearing the Swoosh logo was released just one year later in 1972 during the U.S. Track & Field Olympic Trials nike air force 1 low in Eugene, OR. Since its debut, the Swoosh has matured into the definitive logo in the world of sports, evolving from a simple running sneaker into the utmost in athletic outfitting covering the entire spectrum of sports activity.
Although hulking and bullish big-men are just as important as slashing guards, kids grow up typically nike air force 1 mid wanting to play like the latter. That sentiment is reflected in the fact that big-men signature sneakers have never done particular well in the sales department, with guys like Michael Jordan, Penny Hardaway, Vince Carter, Allen Iverson, and Tracy McGrady peddling their wares a lot more successfully than the Shaqs, David Robinsons, Tim Duncans, nike air force 1 and Amare Stoudemires. Still, this list of the 25 best Big-Man sneakers of all-time, compiled by Complex, is an impressive one, as it includes a few of Shaquille O’neal’s crazy Reebok joints, a few Nike Air Force gems from the early 90’s, STAT’s Zoom Huaraches, and even the trending Air Total Foamposite Max. Check custom nike air force 1 out the sampling of the Top 25 below and head to Complex for the entire feature!
Are there certain sneakers that you’d rather never got a retro? Ones so precious that you don’t trust a sneaker company to get it right on the second go round? If you have trouble coming up with anything where to get nike air force 1 in that category then don’t worry, list gurus Complex are here to help. Included in their group of sneakers that are “too good to be retroed” are the Reebok Victory GTI, Nike Air Python, the Nike Air Command Force and…well just hit the jump if you want to see more. Or go ahead and black nike air force 1 mid see the whole compilation at Complex.
To this point in its 2011 Nike Sportswear resurrection, the Vintage Nike Sky Force ’88 Mid has appeared exclusively in classically styled color-on-white designs or fresh takes on tonal suede and leather. These new editions have a similarly old school feel thanks to some high contrast blocking nike air force one mid in their own right, but you’ll find taht these two new pairs achieve a vastly different end thanks to large portions of black on the base layer. Red or air force 1 nike blue framing elements give these a ‘J-Pack’ look that’s sure to be gone from store shelves with the quickness, so act now if you wanna grab one today from the UK’s Size?
Today marks the launch of our Best of #SneakerNews series, wherein we will be featuring some of the best on-feet photos as culled from the #SneakerNews hashtag on Instagram. A quick reminder: We will only feature on feet photos without any add-ons and over-filtering, and we’re definitely looking for diversity women nike air force 1 in each “Best of” set. Click below to see the inaugural group, which includes Yeezys, Reebok Classic Leather collabs, LeBron 11s, and more. Also remember that we’ll be selecting the best from the group for a shoutout on the @SneakerNews Instagram page!