Storyboard Trial Version - can not create anything. the CREATE button is greyed out. 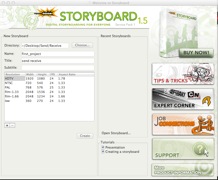 That image is too small to detect any evidence that might indicate the problem.

Odd how Storyboard Pro automatically fills in the Title as you type in the Name but you must manually enter both in Storyboard. In Pro they are identical except an underscore replaces any space but in Storyboard the two do not have to match.