setting up a bone structure

hi,
i’ve just set up the bone structure for the tail of the dog. everything, except for the tail parts is excluded from the ik (hound master and lowerbody, too). the first bone should have been the tail peg (the drawing module), but there’s some obscure point which gathers the focus of all tail parts.
the tail parts are connected directly to the composite. the tail should be the only part with the ik-capability.

what have i made wrong?
thanx in advance for any suggestions.
rob 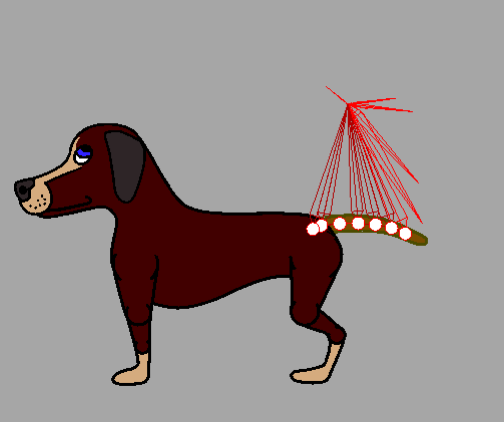 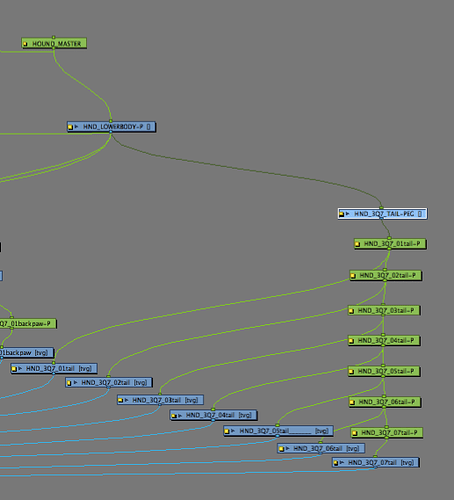 is the examination of the ‘parent’ module for the tail peg (a drawing element).
the lowerbody-p module has apparently a pivot outside of the dog’s body (visible in the transform tool mode), but there’s nothing to be set in the pivot point mode.
the lowerbody-p layer (a drawing module pretending to be a peg) is animatable with the animation tools and has the pivot point set to the drawing layer.

i can’t figure out how to transfer the pegs from the child part to the layer above it’s peg’s part.
or maybe is there any simpler solution?
thx,
rob

Treat the tail as another leg, it’s peg should be a child of (i.e. inside of) the dog’s body’s peg (just as the leg chains are). The pivot for the tail group
should be where the tail joins to the dog.

but i can’t get it anyway. the tail has been set as a child of the lowerbody (similar to the leg setting), and the bones are still messy.
i’ve manipulated a few bones in the tail, and the result is more confusing than before:

the pivot point for the master has been set in the body middle, and all offsets have been repaired (according to lilly’s tips of the week on pivots)
i can’t understand this strange pivot position.
rob

Well, I don’t have Animate Pro yet… so can’t judge the Network-view provided…
But, if you like here is my Animate Timeline-Hierarchy of a Monkey with a Tail…
http://img856.imageshack.us/img856/981/timelinehierarchy.jpg

i have a similar hierarchy as your ape’s. it’s actually the same as in shabana’s videos for the rabbit.

i’ve checked all 90 layers and corrected all pivot points, either with the pivot tool as well with the advanced animation tools (translate / rotate).

the master
–the forebody (with head and facial features, torso and both forelegs)
–the backbody (with both backlegs and the tail).

all with middle pegs and drawing elements as final pegs. the pivots seem ok (a screenshot),

but the bones are misplaced. e.g. the forebody has a correct pivot, but its bone floats one meter above the pivot,

so the whole hound looks like on the photo (unfortunately the screenshot tool makes the bones disappear onscreen).
there’s apparently some hooked pivot that i can’t trace.

this mess gradually drives me nuts. i don’t have a single spark of an idea. can anybody help?
thanks,
rob

this mess gradually drives me nuts. i don’t have a single spark of an idea. can anybody help?

Hmmm… strange… If you can’t provide a download link of your project file…?
You might be able to send that file to the Toon Boom Support Team…?
I guess, they can figure out what is going on…

You might be able to send that file to the Toon Boom Support Team…?
I guess, they can figure out what is going on…

a good idea. do i need some art of a software support contract? and where is the link to the support?
thanks.
rob

from the previous posts: the forebody bone and forebody pivot.

they are misplaced and all of the body parts are sticking to the forebody bone (and the backbody as well). excluding all of the bones from the ik and leaving only the tail elements pegs (the drawings themselves are hooked at the ominous bone pivot, too) repairs the tail bones, but it doesn’t explain why the bone pivot is in another place as the drawing pivot.

all parts’ drawings bones stick to this point, their pivots are ok, and so are the parts’ pegs bones

in other words: the bone pivots don’t follow the pivots set with the pivot tool. can it happen? what’s going on?
thx,
rob

There are a lot of unnecessary control points for the dog’s tail and likely many more points of articulation than are needed. The pivot should be where the tail meets the dog an not in the middle of the dog’s body. Those control points on the dog’s torso need to go if they are in fact controlling the tail.

I would not even use IK on a tail, just a simple hierarchical peg structure would be more conducive to a smooth-looking movement when animating the tail but if you are comitted to using this then you should probably review Lilly’s Tips&Tricks video to determine where your dog’s tail “went off the rails”.

the real trouble is this point above the dog, where all parts’ drawings bones hook, although their pivots are correctly placed around the body.
the parts’ pegs are ok, too.

i’ve removed all bones from the ik, with the exception of the tail (its peg bones are ok), now i can use the ik, but only for the pegs’ bones, not the drawings’ bones.
it’s interesting what you write about the simple hierarchy with no ik (i thought the ik would be better for this). i must give it a try.

yes, i’ve watched the lilly’s pivot tips a few times, but they can’t explain this strange hooking of the dog’s bones to some distant point.