Hi all!
I’m quite new to toon boom and I’m struggling with copying and pasting nodes/elements with drawing substitutions.
I’ve got an eye that I want to duplicate- rather than draw again. I’ll be adding shapes to the eye so I want to make sure that these drawing substitutions are going to be carried across later.

I’m copying and pasting using the “paste special” dialogue box, and ticking the “create new columns” box and the “Reuse existing elements”. I’ve made sure that "paste all frames of the symbol (full movie) is also ticked.

But after I’ve duplicated, whatever I do to the new drawing layer (like move it on the y axis) also happens to the original drawing. I’ve only done and a short course in rigging and I’m sure this didn’t happen in class! It seems like I’ve probably not ticked or unticked a box somewhere down the line, but I can’t think what it could be.

I’ve attached a screen shot of my dialogue box. I’ve tried all sorts of tick box combos now, so this isn’t how it was when I started…

Any help on how to duplicate elements like this in node view would be much appreciated! Thanks! 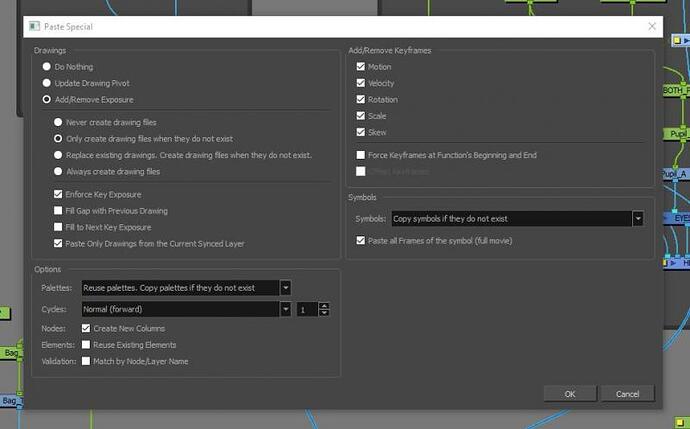