So I was making a little animation and was having a little trouble with some layers. I’ll just highlight two seperate layers that are the most important right now - the cat’s body, and the cat’s eyes.

The cat’s body was above some of the layers, which wasn’t a big deal until I discovered that the cat’s eyes were underneath that layer, making the cat eyeless.

I looked up how to set a layer in front of all or one layer, and found nothing really at use. The closest I got was from this Toon Boom Harmony site, which explained the two different types of layers in one part - Overlay and Underlay.

This helped until I couldn’t find ANYTHING in my program (Toon Boom Harmony Stage Essentials) that represented that. All there was was Drawing> Arrange. Arrange had the settings I needed (Bring to Front, Bring Forward, Send Backward, Send to Back), but all of them were greyed out where ever I selected.

So I need the eyes of the cat to come forward and be above the body, so I won’t have a weird, eyeless cat in my animation.

-Overview of my Programs-

Picture of the animation screen: 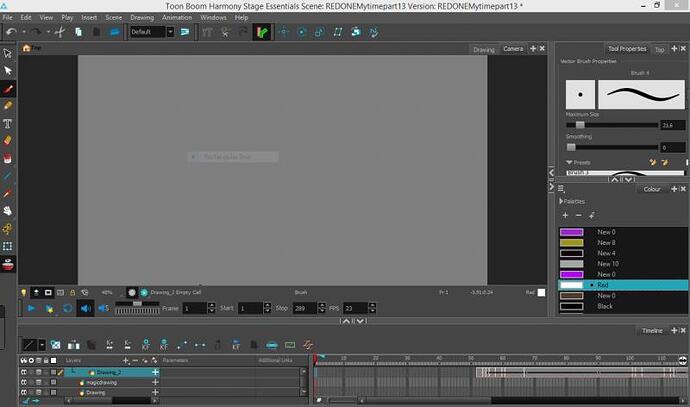 Try changing the z depth instead of reordering layers. Click on the ‘plus’ symbol next to your eye layer in the timeline and adjust the z depth there. (If you have the eyes attached to a peg adjust the peg’s z depth instead of the drawing layer). Usually you will only need to change the value from 0.000 to 0.001 to make it appear on top. Don’t use the overlay and underlay for what you’re trying to do.

You can shift the eyes’ drawing node connections further to the left of your composite, that is, if your composite is on “Bitmap” (rectangular) and you have not touched any Z values yet.
By logic, the node that is connected on the leftmost part of the composite appears as the frontmost part of your rig/puppet, and the rightmost connected drawing node appears behind the rest. Say, Node B will appear infront of node A when the first is connected on the composite, left side of the latter’s.

In Essentials there is no Underlay and Overlay (sub)layers, there’s only one art layer per drawing. The Drawing > Arrange tools are meant to work within the same layers, to arrange lines and shapes drawn together.

That’s Awesome, thanks for sharing that.

Quickest way to do it is with the shortcut “Alt + arrow Up” or “Alt + arrow down”. (This will move the drawing/peg 0.001 back or forward)