Hi, I have a slightly weird question. I’ve been bending my brain around this for the past few hours but was unable to come up with any solution.

Here’s the thing. I have a leg drawing on this character I’m working on. It’s a simple drawing with 3 substitutions. Each substitution has it’s own deformer. Each deformer is made of two bones and a joint in the middle (knee). Everything works fine so far.

Now there’s another drawing. It’s an “armor thingy” on the knee. This drawing (single layer) also has 3 substitutions. (front, side and back view).

The question is…can I somehow merge waypoints coming from those three bones into one? Or am doing this completely wrong? I’ll try to attach some images for better understanding. 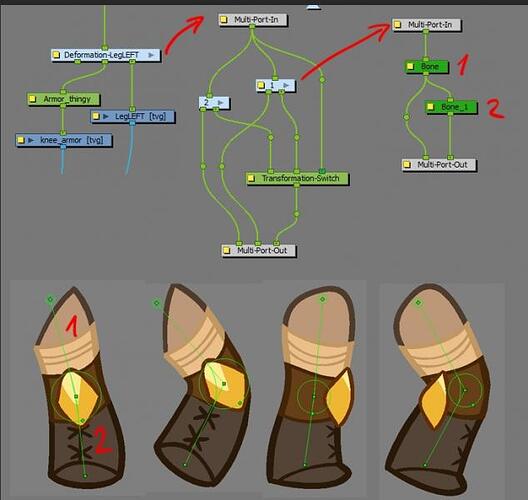 You can pull in another transformation-switch for your kinematic outputs and set them to the appropriate drawings. You’ll end up with two threads exiting the deformation group, one for full chain and one for the knee, instead of the three you have.

@MarcLefevre Thank you! That’s almost exactly what I needed! The knee armor still gets deformed if the upper bone is stretched. My aim was that the knee would maintain its shape no matter what you do with the deformer as long as it stays attached to the knee joint. Still this is a sufficient and usable solution as the deformer probably never gets stretched during animation. Thank you very much, you’ve helped me a lot.

If anyone ever stumbles upon this thread with same issue, I’ll attach a pic of how your nodes should look.

Please add a pic to show how you solved it in the end.
Thanks!

This post gave much knowledge but when I tried a similar thing it did not work. I dont understand why,

I have a character with 2 positions so I made 2 different derformations chains. Works fine.

then I wanted to add two Kinematic Output element on each chain, the head and the arms.

I try to add them into separate transformations swithes but they will not connect the the arms/ head,.

So there is something wrong there but I can’t figure out what, Anyone who knows?

(sometimes you could add an image on a post but can’t do it now. so I send a dropbox link.)
https://www.dropbox.com/s/csg8rbzdfy78kgy/bone_rig-KineOutput.png?dl=0

I looked for a sollution and tried the deformation compsite, and I managed to get the KO working but I had to switch in the settings when I change chain.
This is what I did:
https://www.dropbox.com/s/cbh6e5gwwvhj4eh/Def-Chain%20with%20KO.png?dl=0

It must be a better way than this so it will change by it self.

Why two kinematic outputs? I usually use just one for both arms and head. Could you show your character with deformers visible?

I used to just have one KO but for a while I have been adding bone so I can move the head but the arms keep still.

Here is a screenshot.

I’ll try to look into it tomorrow when I’m at work. While I see that you found some solution it doesn’t seem to be ideal.

No, It must be a better way.
If you send me your mail I can send you my projects to test with so you dont need to recreate the artwork.
my mail is mattias@gordon.se