I want to import this procreate character as PSD file any suggestions on how to do it ?

I’ve been attempting to import this character into tune boom I saw a storyboard thread where somebody said to create a new group for each part I did that it still wouldn’t allow me to import. 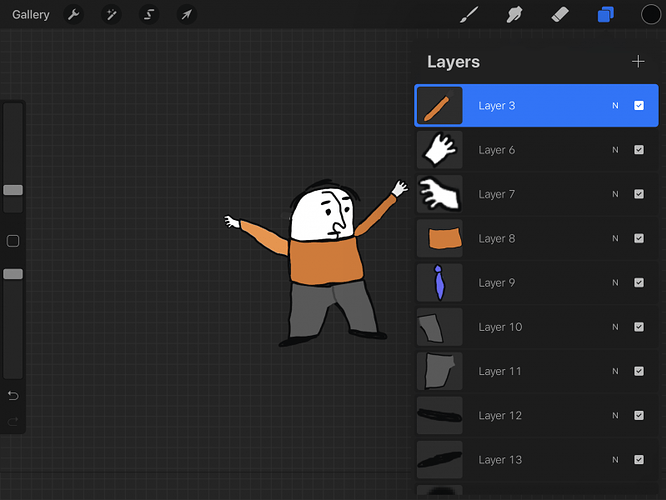 There is not really a point rigging a character for Storyboard.
There are no tools for rigging in Storyboard and it would likely
take just as long to pose the character as it would to just draw it
in the pose you want.

This is more something you would do for Harmony which has
the tools for rigging a character.

If you want to import a multilayer PSD, each layer in Photoshop must
be in its own group and there should not be nested groups.

https://docs.toonboom.com/help/storyboard-pro-6/storyboard/layer/import-image-layer.html?Highlight=import%20psd
(for more info in how to import)

Hi Kriz , I have harmony 15, I’m using procreate do you have instructions for that?

I meant to say as far as storyboard was concerned that was the only topic I found about importing PSD images.

The info is pretty similar for Harmony 15.

Here is the link to the help documentation on importing Multi-Layer PSDs:
https://docs.toonboom.com/help/harmony-15/premium/import/import-multi-layer-psd-file.html?Highlight=import%20psd

It says adobe, I have Procreate. I will have to wait for the Adobe iOS app this year.

You can export your file as a PSD in Procreate.

Yes you can. But in order to bring in the character to rig you have to do it with the group specs that Kriz mentioned. When you read the article it says you can bring in adobe PSD files I’m assuming that only means Adobe. Because I cannot structure the group the way it is given in the example.

I’m surprised that it doesn’t work. I don’t have Harmony right now, so I can’t test it. I figured that if you put the layers in groups and export as a PSD it would work as expected.

I saw your other post with screenshots of the errors and it seems like the problem might be due to the way you are naming things. Try giving a unique name to all of your groups and also eliminate any spaces in layer names. Use an underscore if necessary. I’m not sure if that will solve the problem, but I remember that Harmony can be picky about the way things are named.

Did this work for you?

Yes, it did, a thousand thanks. I would kiss you if I was into that type of thing.

It is very easy to convert file with software. I can also try at home.

Please tell me how you named your layers so that they would import to toon boom I can get the procreate files to import but all of the images (layers ) import onto one single layer in toon boom thanks .

Please tell me how you named your layers so that they would import to toon boom I can get the procreate files to import but all of the images (layers ) import onto one single layer in toon boom thanks .