Exported swf does not look like the program's preview

I’ve tried many possible solutions and the outcomes just seem to look worse and worse… I’m starting to thinks there’s maybe a problem with my version of the program.
what happens is that my “eyes” symbol seems to get all screwed up when I’m exporting a swf file. It looks nothing like the preview on the program itself. I’ve attached a pic of both the swf version (left side) and the program preview (right side). You can see that the eye-ball and the eyebrows on the character’s right side are not positioned right and don’t match the program’s preview on the same frame.
What can be causing this? 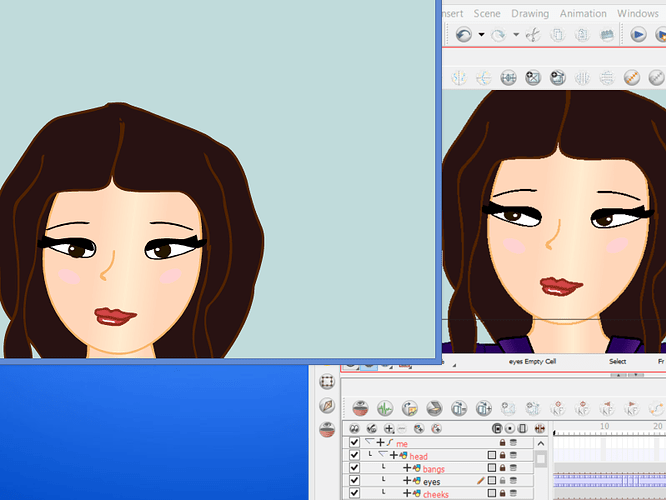 I’m starting to thinks there’s maybe a problem with my version of the program.

As far as I know, many effects are not supported by the SWF-format…

There is nothing really wrong with your version of the program,
it’s rather a limitation of SWF file format.

Keep your characters and effects as simple as possible…
Otherwise, export as QuickTime Movie.

Okay thanks. I’ve tried to export the movie (the program automatically saves it as a .mov file), but for some reason it doesn’t play well on the player - the character doesn’t move at all, and I have the toonboom watermark covering the whole thing (even though I purchased the $600 version of animate 3).
Is that a known issue maybe?.. what can I do?

With a visible “watermark” in the render you’re using the PLE version…
Delete (uninstall) the Personal Learning Edition…
Download and install the full version of Animate 3 from your Toon Boom Account.

Yes, thank you. I thought I had already removed all traces of the PLE version, and was sure that the .anim file I was working on should have nothing to do with the PLE version, but apparently there was more to delete, and it did change the exported .mov file so that the watermark had disappeared.

Also, I found the reason for my earlier problem as well.


Thank you very much for the assistance.