Hi. I’m having an issue trying to figure out how to make a part of a kinetic deformation work.

Here’s the situation (I’m on Harmony Stand Alone 10): I have a character’s body that has two separate bone chains on it. One goes from the neck, to the right shoulder (the articulation), to the right elbow. The other goes from the neck, to the left shoulder (the articulation), to the left elbow. Then, I have a left and right forearm separate. What I am trying to do is connect the forearms through a kinematic output of the body so that they move with their corresponding shoulders and upper arms.

I can get this to happen with ONE arm by making a kinematic out put on the body (where both separate shoulder bones are), as it moves with the first bone I made, but no matter what I try, I can’t get the other arm to move along with it’s corresponding bone. All it will do is either move along with the other bone (as the other arm does), or not at all.

Been trying to figure it out for hours now. What am I missing here? 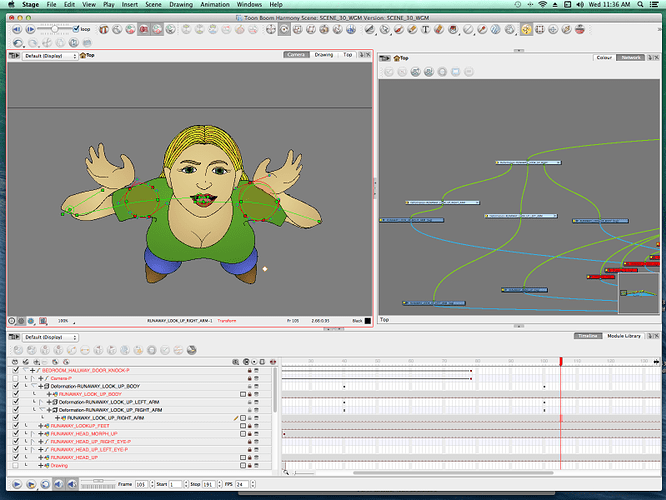 What does your deformation network look like in the network view?

I was just about to post an image of it, but I can’t find an option to do that a reply. I was able to do it in the original post, but I can’t now. That’s annoying. I did a work around for time’s sake to get the scene done, so at this point a pic of the network probably wouldn’t be too helpful as I changed things to make it work… it just doesn’t work quite the way I’d like it to, which doesn’t bode well for future situations where I need/want to do the same thing.