Posted this in the wrong section before.

When I go to make a line (or click anything) it appears above and to the right of the cursor. This only happens in Toon Boom, so I don’t think it’s just my tablet or anything. Although, it doesn’t happen with the mouse, so it has to be my tablet at least in part.

I’ve attached a screenshot to try an illustrate what I mean.

The first time this happened, it started working normally again after a while, but then it went back to being messed up the next time I opened TBH and never stopped.

I tried reinstalling both my tablet driver and TBH, but neither helped.

Sometimes the line goes back to matching the cursor, but it only lasts a few seconds and when it breaks again, the line I was drawing disappears.

Also, the line that floats away from the cursor seems to ignore pressure sensitivity- it stays very thin, comparatively. 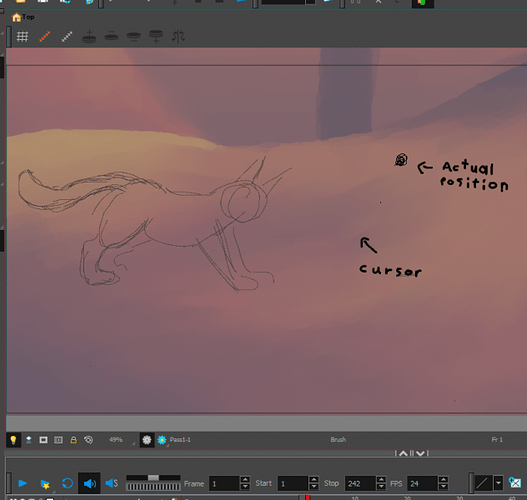 Did you delete the driver before reinstalling it?

Yes, I deleted the driver before reinstalling it.

I’m on Windows 7 (the computer won’t support an upgrade to 10 and always aborts halfway through.)

Tablet is a Bamboo Pen (CTL-470), by Wacom. (I own an Intuos 4, but both of the ports in it came loose and I never got around to trying to fix them.)

I have heard of someone having a similar problem with the same type of tablet in FireAlpaca, but I don’t think a solution was ever found.

I think when I uninstalled Toon Boom, I didn’t manage to do so completely, because it still remembered my most recent project, so I’ll try doing that again soon.

edit: Didn’t work. But I heard something about removing all Wacom-related files from the computer fixing this problem, so I will try that.

To resolve the problem you must uninstall ALL tablet drivers and
remove ALL tablet preference files. Shut down and restart the
system. Downloads and install the latest tablet driver for your
model of tablet and use the tablet utility to define your new tablet
preferences. Reboot after doing this.

In practice it can be difficult to find all tablet drivers and preference
files so it may help to do a system file search using the keywords
tablet and wacom (independently). If you are on Windows and have
experience editing the registry, also do a registry search using the
same keywords.