See the attached image: while cleaning up a shot the pencil tool will not display outside the grid area. The brush tool does not have this defect. You can see the dark brown clean up line that stops before reaching the edge of the frame. The blue rough brush works OK.

I have to draw outside the frame area to work with moving pegs. Naturally, I need to work larger than the default field area. I need a solution to this problem yesterday!

I am trying to work with paths turned on (hotkey K) so that I can at least see where the pencil line will be when I render. However, this is causing Harmony to regularly crash. Harmony routinely crashes anyway, but this is making things worse. I don’t have these instability issues with any other apps, even open source tools. 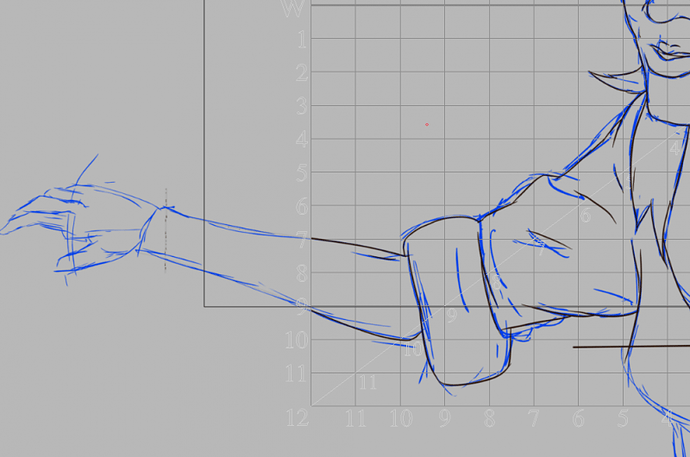 i have certainly seen this issue myself on my end.

i’m assuming you are doing more traditional animation than puppeting? my advice is to get acquainted with the Drawing View better. that issue should not be found there.

i wrapped up a fully drawn job a few weeks ago. i was using the Drawing View almost constantly, and i came to prefer it to the Camera for traditional. you just can single out drawings much easier there. also, i have really come to love shift and trace. i find that it is a bit clumsy to use, but once i got used to its quirks, shift and trace was a great way to isolate drawings to refine and do trace-backs.

i also would like to say that i have found harmony to be very stable on both PC and macs. that isn’t to say that i haven’t had it crash on me or others, but its far more stable than flash in every sense of the word.

This problem is also present in the draw view. I started off in draw view, but there was such a pronounced delay every time I moved or rotated the work space that it was affecting my ability to work productively. The delay went away in camera view, especially when I switched back to brush - to be even able to finish the shot.

Most of my Harmony crashes have been video card related. However, I don’t have this video card issue in any other application. And, I don’t have any agenda with this. It’s just the facts of the matter. This pencil tool issue is not giving me a video card error. Something else is getting corrupted.

Try updating your graphic card driver. If you’re on Windows, disable the Aero desktop theme. Also try using the “Alternate Gradient and Cutter” option in the OpenGL tab of the Harmony preferences.

i’d like to add to this thread that i have not experienced this issue in some time, and i dont think i did anything other than upgrading my card in that period of time.

Yum Yum, I love lots of mustard on my crow. I just got off the phone with Wayne in tech support. My rigging tools were not working. It turns out that both the rigging and the pencil line display problems were being caused by realtime antialiasing being turned on in the Open GL preferences. So far that seems to be it.

I somehow misread the manual on preferences setup for rigging, and had it turned on.

Frank, I saw you credited as animator for Hornets gun safety spot. Nice job. Did you use the pencil tool for the textured outline of the characters?

What exact hardware are you using, if you don’t mind me asking? and which version of Harmony? You’re not having any trouble, and I’m at wit’s end.

yeah that was me listed in the credits though i only lent a hand in cleanup for a few shots. two friends of mine, keelmy carlo and mark pecoraro, who i sat next to while i was animating on another, unreleased job, did the vast lion’s share of work. they were both new to harmony so i helped them with the technical issues they encountered along the way.

they were given a PSD of the character designs that were done out of house, but were tasked of re-creating them in harmony. the lines were very chunky. i created the pencil texture that was eventually used for final cleanup. the standard chalk pencil was used for smaller detail areas.

as for hardware, we worked on mac towers that are showing their age at this point. harmony worked better on some than others. it was very slow on mine, but it was still serviceable. i did the cleanup work at home on my PC that i built almost 5 years ago which runs harmony pretty well as well as a Surface Pro2 when i was on the road visiting family. harmony runs surprisingly well on the SP2 though its cramped. i would say neither the macs at hornet or my PC at home are running anything special. the edit and comp macs at hornet are a different story. i believe they have far beefier specs.

glad you liked the spot. it came out nice, and i was happy to lend a hand with it.