In the bitmap brush settings we have a slider for ‘maximum size’ and ‘minimum size’. The problem is, when I scale up the maximum slider, this also seems to scale up the size of the minumum brush size as well. This makes it impossible to create a brush that starts out with a very fine line with low pressure that can expand into a larger shape. See the attached example.

You can see that in the middle drawing, the minimum size is set to 0%, yet even at the lowest pressure, the line still starts out huge.

The issues as I see it is that the brush’s scale is intrinsically linked to the ‘maximum size’ slider. I feel that we need a separate slider to control the overall brush scale, so that sliding the maximum slider doesn’t effect the minimum size. The same could be said about opacity and flow. It’s very difficult to achieve a soft airbrush look that starts out very subtle at the softest pen pressure, but also ramps up as you press down.
’
This is a very simple feature that is critical for certain pen and ink styles.

Beyond this, I’d like to see smudge and blurring effects and painting with blend modes,wet edges etc, but in my view the above is fundamental. 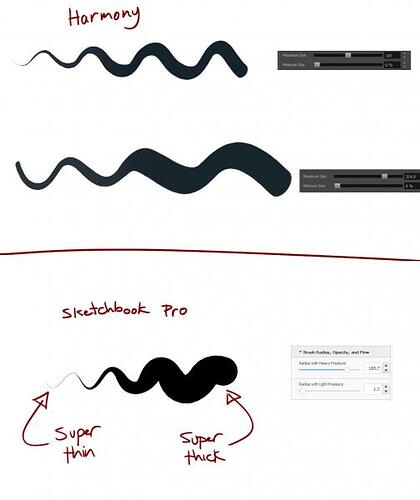 This is probably an issue with the tablet and the way it interfaces with Harmony. I have a Wacom Intuos Pro and tested a brush and pencil with min 0% and 1% and a max 500%. I was able to achieve a very fine line.

The sliders are based on percentages. That may be more or less eye candy and not a true unit of measure, I don’t know. If these were points or pixels you could dial in a specific size. I set up a brush and pencil 1% to 500% and could achieve the thinnest of lines. I saw no difference when I tried 0% FWIW.

The problem I encountered was that it is very difficult to be that delicate with the pen. With a large range from 1% to 500% there is such a large ratio to cover that it is too sensitive to pressure. I could only produce a fine line if I put all effort into applying the lightest pressure. I would never be able to draw like that. But this was just an experiment using the most extreme custom brush.

I have both a Wacom Intuos Pro and an Apple iPad Pro used like a Cintiq. I could not achieve the same fine line using the iPad Pro. It requires too much pressure before it senses anything so it jumps to a thicker beginning size. This is not to say it cannot produce fine lines. It just cannot produce the absolute thinnest line when it is set up to also produce a very thick line with pressure. 1%-500% is the most extreme range to cover. For thin lines you must restrict the iPad Pro to narrower ratios.

I’d like a way to adjust resistance in a pen. It may or may not exist already. I am not aware of it. The Wacoms have always been way too sloppy for my taste. I get unwanted flourishes at the ends because it does not stop producing a mark soon enough when I am lifting the tip. Their springy tip is part of the problem The iPad being less sensitive in this regard and not having a springy tip is easier to control. However the ideal is being able to adjust these myself depending on what brush I am using.

Ampy, I think you’re right. It’s entirely possible that the problem lays with the pressure curve. I hope that Toon Boom do introduce a way to fix this. The closest work around I can think of is to download an external tool to adjust the pressure curve, but this will throw all of the other brushes out of whack.