Hi
Ive drawn a dragon. Its jaw, wings and legs are separate layers, attached to the body. I am animating them using the cut out method, with a simple pivot at the joint. The Head, tail, body and tail, are one drawing. I have used the bone deform on the this layer. The problem I am having, is that the bone deformations, effect the wings, and legs and jaw , as well as the body. Is it possible to exclude these elements from the deformation?

Thanks
all the best 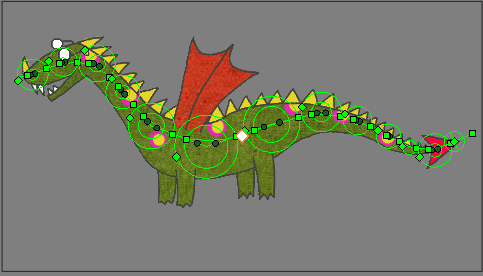 Odd, by my knowledge the deform should only effect the drawing layer its applied to. Unless you have somehow connected the layers in a hierarchy? I would check your network view and make sure they aren’t connected to each other.

You have to create a kinetic output on your deformer module in the Network view. Then attach the parts you want to move along with the body but not be deformed. Look it up in your manual for details on how to do it.

I use this for arms. The upper arm and forearm are animated using a deformer and the hands are attached to the arm deformer module using the kinetic output. As the arm moves, the hand follows but it is not deformed or warped.

I had all the layers connected in the Hierarchy

Thanks for the advice, I had never tried a kinetic output before, its seems to be just the trick.